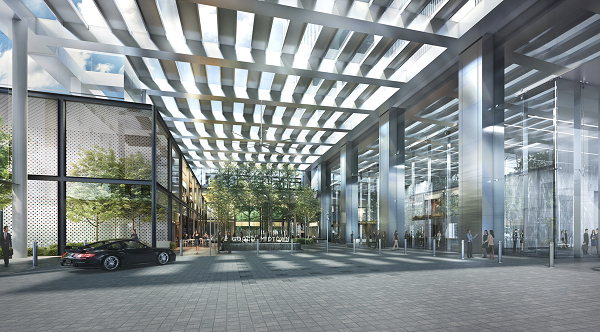 Midtown Square will be a relaxed place for social interaction (Credit: GuocoLand)

“The design of Guoco Midtown represents the best in contemporary thinking on placemaking to create great streets, great neighbourhoods and great cities,” says Adrian Fitzgerald, design director of Denton Corker Marshall, one of the architects for the project. Instead of one mega structure, Guoco Midtown boasts 10 different buildings of varying heights: from one and two-storey retail pavilions, a five-storey Network Hub, to a soaring Grade-A office tower and residential tower, seamlessly connected with each other.

The design of Guoco Midtown serves to promote community interactions. For instance, a new internal street — Seawater Street — will be flanked by two large sheltered public plazas, Midtown Square and Market Place. The former is a relaxed place for social interaction, while the latter is an interpretation of a street market, according to the developer. Seawater Street can also be closed to traffic so that it can link up the various public spaces to host large-scale community events during weekends, accommodating up to 500 people. From Midtown Square, one can also access the office lobby and underground pedestrian network directly. Market Place will be an interpretation of a street marke (Credit: GuocoLand)

Meanwhile, at the Network Hub, Midtown Bay’s residents will enjoy amenities such as networking lounges, MICE (meetings, incentives, conferences and exhibitions) facilities, collaborative work spaces, as well as venues for private dinners, gatherings and social parties. GuocoLand will also be offering a “flex and core” leasing concept, allowing its office tenants to lease short-term workspaces at the Network Hub. “In view of the current pandemic situation, a flex and core leasing concept is just what office tenants need,” says GuocoLand.

To top it off, there is a swimming pool on its rooftop, open for use to its office tenants. Greenery has been a focus for GuocoLand in Guoco Midtown. In total, there will be around 20 gardens of different sizes at the development, with many of them accessible to the public. These include a “therapeutic garden” — with different sections such as the Fragrance Zone, Biodiversity Zone, Edibles and Medicinal Zone, Colours and Texture Zone and Interactive Zone — which GuocoLand touts as the first to land in the CBD.

Other gardens in the development include a selection of ferns, coastal species, an epiphyte collection (which will contribute to its hanging gardens), and a waterside collection. There will also be a Native Garden, featuring an outdoor botanical library of native plants and orchids.

There will also be a Sky Park and a Crown Roof Garden at the office tower, while residents at Guoco Midtown will be able to indulge in nature at the Residence Garden and Sky Terrace within Midtown Bay. GuocoLand has designed Midtown Bay to embody flexibility, suited for the WFH (work-fromhome) era. For instance, the wardrobe doors and its reflective surfaces are designed to be neutral, intended for homeowners who wish to turn their bedroom into a home office. In the day, the living and dining areas are also large enough to be converted into conducive work spaces, says the developer.

The units in Midtown Bay are also designed for entertaining at home. GuocoLand has ensured that the living and dining areas are large enough to host a party of friends within the privacy of a home. Midtown Bay will be plugged into the vibrancy, convenience and abundant facilities at Guoco Midtown. There will also be low-rise shops and an array of restaurants where residents can drop by to purchase food or daily necessities. In addition, the development will be built with an underground pedestrian network, sheltered links on the ground and overhead bridges. Through the sheltered walkways, residents will be able to walk to Raffles City, City Hall, National Gallery Singapore and Suntec City. Meanwhile, the underground network will link people directly to Bugis Village and Bugis MRT Interchange Station.

Hello, my name is Christine Lai, a real estate consultant at Huttons Asia Pte Ltd with years of experience. My areas of expertise include condominiums, HDB, landed properties as well as commercial and office space. I understand that each of my clients has different needs and requirements and I treat everyone with the highest degree of service and profession...